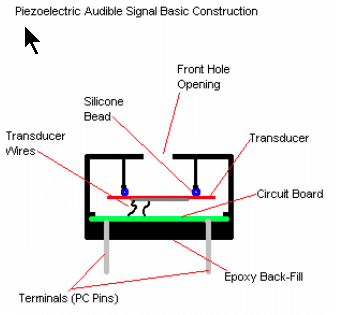 The above cross section picture shows the basic elements used in a piezoelectric audible alarm. The area in front of the transducer element including the front hole opening forms an acoustic cavity that lets the sound radiate out with the most efficiency (i.e. loudest sound level). If the alarm is an indicator that contains a circuit board, the circuit board is attached to the piezoelectric sounder element via soldered wires.

If the back of the alarm is sealed with epoxy or other material, the “guts” of the alarm (including the circuit board and components) are protected against fluid intrusion. However, fluid sitting inside the front cavity can obstruct the operation of the device causing the sound level to decrease significantly. If you need to wash the alarms after a soldering operation, it is strongly recommended to use an alarm that comes with a wash label that keeps the washing fluid from getting inside of the front cavity.